How Wearing Down Brakes and Tyres Can Cause Environmental Pollution

How Wearing Down Brakes and Tyres Can Cause Environmental Pollution

One in every six MOT failures is caused by brake or tyre problems. Unbeknownst to many, driving can wear down our tyres, the brakes and Britain’s roads. Most wear material ends up as dust on the roadside or washed down our drains. But it can deceptively contribute to air pollution.

How is tyre wear material damaging the environment?

The particles that are released as a result of brake and tyre wear are rich in transition metals, adding to the toxicity of the air. Plans are in place to try and tackle exhaust emissions, which is also adding to air pollution. However, the focus has shifted to the particulate matter that’s being released by worn brakes and tyres.

With a diameter of approximately 2.5 micrometres (which is roughly 5% of one strand of human hair), these particles are small enough for humans to inhale into their lungs via the throat or nose, resulting in respiratory problems in humans.

As the transport sector moves more towards electric vehicles, around 90% of harmful emissions will be caused by the microscopic particles that come from eroding brakes and wearing tyres, as opposed to exhaust emissions. A 2012 report from the Department of Environment, Food and Rural Affairs estimated that around 18% of air pollution was made up of exhaust emissions, whereas brake and tyre wear made up for 11%. Figures for future reports, however, remain worryingly uncertain at this time.

King’s College London conducted a longitudinal study where they tracked 65 roads in the UK over the course of 10 years, to see whether there had been an increasing amount of wear-particles that were released into the air.

The study concluded that although there had been an increase in wear-particles, some roads where air pollution once benefited from the improvements in diesel engines, were no longer seeing a positive change. The benefits of more efficient diesel cars had been outweighed by the increase in particles from tyre and brake wear. The busier the road, coupled with a significant amount of heavy goods vehicles, the greater the increase in the found.

Advancements in car technology – have they contributed to air pollution?

In general, new cars are heavier than the vehicles they’ve replaced, resulting in an increase in brake and tyre wear, but it’s not all bad. Although cars have become bigger and therefore heavier, they’re more fuel efficient, some are electric and there’s even work being done to have the cars of the future running on H2O.

Many advancements in car technology have been good news in terms of harmful exhaust emissions. So much so, research into brake and tyre advancements has taken something of a backseat.

An automotive parts giant has recently launched an ‘iDisc’ brake disc which is coated in tungsten-carbide. It emits 90% less brake dust than a conventional cast iron disc, but they’re unfortunately triple the price. However, as production and sales increase, the price is likely to drop by a considerable amount, encouraging more people to switch out their brake discs for more environmentally friendly ones.

What can you do to help?

There are many ways in which you can help lower the level of dangerous particles that are released into the air by worn brakes and tyres. Firstly, ensure you get your brake discs regularly checked for wear or damage. We offer a brake repairs and replacements service at Munster Tyres, where one of our experts will be able to inform you if your brakes look worn.

The consequences of driving with an illegal, and subsequently dangerous, tyre tread depth (less than 1.6mm) are extremely serious. You could receive a fine of up to £2,500 and 3 points on your license. If you’re driving with 4 illegal tyres, that’s a fine of £10,000 and 12 penalty points.

If you have an accident as a result of driving with illegal tyres, your insurance could well be invalidated, leaving you to pick up the bill. As well as this, you’re inadvertently contributing to air pollution. To prevent this, check the tread depth on all 4 tyres regularly. We provide and fit tyres onto cars and vans to suit all budgets, we even supply high-performance tyres, designed for faster speeds. 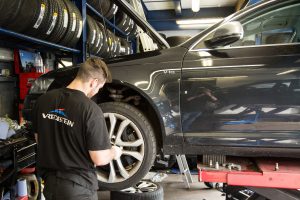 Munster Tyres are leading suppliers of tyres and car servicing in Fulham and West London. With 40 years of experience in the industry, we’re committed to providing expert advice and workmanship. Carrying out car servicing, repairs and MOTs efficiently and to a high-quality standard. Contact us today for enquiries or further information regarding the services we offer.